The Irina Shabayeva show we attended last night was held in the Garment District, away from the main Fashion Week tent at Bryant park. The avant garde setting, darker with blue lighting, gave the show much more of a nightclub atmosphere than the Georges Chakra show we had attended earlier in the day. The people, or course, were every bit as colourful as we’ve come to expect.

The collection was also quite different to the one we saw at the Chakra show. Irina’s garments were a lot more complex and the outfits were highly accessorized for true runway drama. Fabrications weren’t as high quality and the tailoring wasn’t in the same class. There were also at least five different fabrications integrated into one outfit. Some of them had more. Hectic! I’m a less is more kind of a gal favouring strong simple lines and clean bold statements, so I much preferred the aesthetics of the Georges Chakra collection, but enjoyed this show all the same. 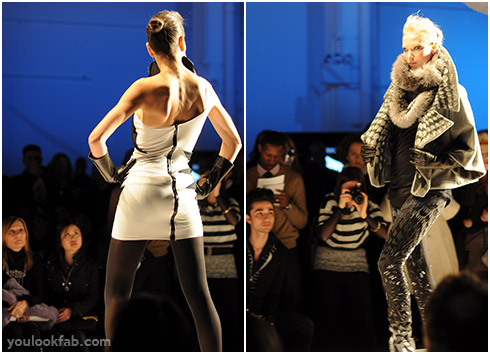 The young designer showed immense creativity crafting dresses and skirts from feathers, leather and fur. She took the wings of a bird as inspiration and the theme came through strongly in each outfit. The dresses looked like moving sculptures as the models took them through their paces down the catwalk. It was very impactful and I fully appreciate the innovative thought processes that went into each creation. 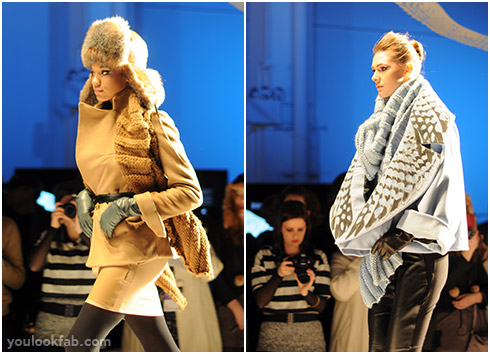 The palette was dominated by camel, grey, black, white and light blue. All the pants were sleek and skinny. All the skirts were short and straight. The dresses were knee length and both A-line and straight depending on the fabric. Knits were chunky and oversized jacket silhouettes reigned supreme. The collection reflected my suspicion that we’re going to see a lot of extended shoulder lines for Autumn. Sorry ladies, but a new fashion era of shoulder pads lies before us. 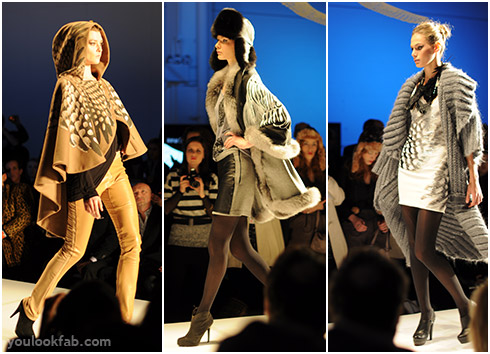 The outfit on the left below was was so dramatic that much of the audience started clapping, thinking it was the show stopper that marked the end of the procession. But another, even more dramatic black outfit followed right after. The dress on the right below was my personal favourite, and judging by the crowd reaction I wasn’t alone. 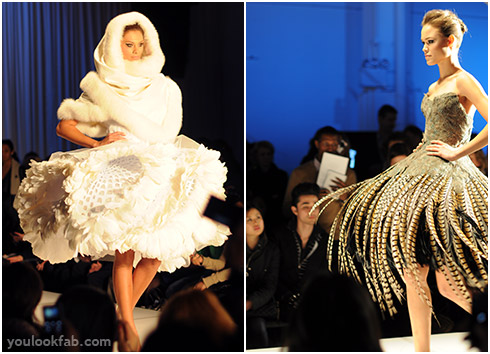 Seeing ramp models in action up close during fashion week has made me think a little more about their job. Striding along a slippery runway in unwearable clothing and six inch heels in front of hundreds of people and blinding camera lights can’t be easy. Not to mention stripping off your clothes in front of the world at the speed of light while five people tug at your outfit and touch up your hair and make-up. Try doing that without appearing sweaty, flustered and exhausted. It’s quite a skill.

For those who don’t follow Project Runway, Irina won the sixth season of this reality TV show.

fun looks, but I liked the Chakra fashion show better I’m still swooning over the black lace dresses.
thanks for keeping us all in the loop back here at home!

This looks to be typical runway stuff that no one we know will be sporting:) But fun all the same, and we will see elements of it in everyday fashion.

thanks for the update:)

Wow, even though it’s not really my style, Irina really seems to be hitting her stride. Those last two dresses are such works of art.

I love love love those last two dresses. I shall dream of the day when an event shall occur in my life in which it would appropriate to wear one of them.

I LOVE the grey/black feather print jacket in the top row of runway. I would wear it everywhere.

My favorites are looks nº 3 (the camel suit) and looks 6 and 7, the faux furs and the big cardis.

What an interesting collection. I also prefer the aesthetic of the Georges Chakra presentation.

Angie, who is the guy with the leopard coat on the front row? I note he also featured in the day one blog. Are you on the same schedule?

Shoulder pads are back – well, that´s good news! Can´t wait to sport them even more than a I already did this season. I´m an eighties girl by heart…..

Thank you for your professional reports from the city of my dreams…. sigh…

Fascinating! I love how you are comparing and contrasting the clothing between the shows you attend. This one really is a spectacle!

I will be largely ignoring the shoulder pad threat…again. They’ve attempted to rear their ugly scapulae several times over the past decade but never really caught on – and they’ll fade quickly again because, a few ladies notwithstanding, most people are not fans.

When every T-shirt and button front used to come with little pads…I snipped them out. The bulk is just too overwhelming for this petite hourglass. That’s ok…unlike in the 80s, we have more choices now and nobody would look askance at one not wearing the things. Hmm…can we discourage having them again for environmental reasons? No sense in creating more little foam pads where they’re only going to be discarded.

Julie, you are observant! We don’t know who the gentleman in the animal print coat is, but he is fabulous, and we seem to be hitting the same shows. Lucky us!

There are some stunning looks in there, all right! I’m wishing for more color, of course, but love the feathers and sumptuous knits.

Greg – The first photo in this group is my favorite, even though it doesn’t feature the models or the fashions!

I love the way the whole thing is dark, but the front row faces are highlighted, with the fab gentleman in the center standing out in his leopard-print coat, camera raised high.

I already knew you were a great photographer from seeing Angie’s pics, but this to me is a piece of art that I’d put on my wall!

I just love these reports!! Like the garments or not, the spectacle of the offerings is so entertaining and even inspiring. It’s also fun to see what a Project Runway winner is up to now.
Greg, like Jenny said, your photos are works of art.

I’m loving the chunky sweaters and jackets with the big shoulders and cowl necks! The white outfit is quite an impressive creation, indeed, very spectacular and beautiful.

What did you wear Angie?
And Greg: are you available for photography classes?!-)

Fantastic craftsmanship and vision there, I have to say. I much prefer the aesthetic of the Chakra show as it is in line with my personal style, and I didn’t care too much for Irina’s personality(as shown on PR).But this woman definitely has a great talent and I think we will see alot from her.

And yes I will be ignoring the shoulder pads this time around.I have nice straight somewhat broad shoulders as it is, no accent is needed there!!

Fabulous! It’s nice to see a Project Runway winner be so successful. These fashions are definitely pieces of art. Thanks again for the great photos and write-up.

It is no secret that I didn’t like Irina nor did I like the last season of Project Runway. I can acknowledge that she is talented and creative, but she was extremely arrogant, and it comes through here. I don’t feel that this collection is showing much of an evolution from her Project Runway winning collection. Still no color (though she has graduated from all black to finally including camel), lots of oversized knits, and a whole lot of everything going on at once. I agree that the dress on the right is stunning though, and the model wearing it appears to be her winning model on PR, so it’s nice to see that they still have such a strong relationship and that she gave her best garment to her favorite model. The big white one is my other favorite aesthetically. Could certainly live without the fur. Great report and even better photography! These pictures look professional. Well done!

I was wondering who the guy in the leopard coat is, too! Love the feather dress in the 2nd and 3rd to last pics also I’d wear that, absolutely.

Very cool. Love the feature skirt, WOW. Otherwise not really loving the styles, and especially all these “nature-y” colors. But still interesting to look at. LOVE love these reports, thanks Angie!!

Thanks for the excitement and perceptions. Greg took all the pictures on our NYFW posts which is why they have a youlookfab watermark. We are VERY lucky that Greg takes brilliant pictures!

What an amazing collection. Some great knits and some interesting and different shapes. Love it.

Oh my Lord, I wish I was younger so I could wear all of these short skirts. I love the prespective you are giving us, so up close and personal. I am so excited looking at these pictures.
I love, love, love the style era we are in right now. It seems to be such a mish mash of everything before this time and it is exciting and beautiful.
The models looks so energetic too. I love how they have styled their hair and make up, very understated to bring down the overstated garments.
Very exciting stuff, thanks for sharing.
A couple of questions if you have time, have you been to a fashion week before? Wow, who needs caffiene when you can go to a fashion show of this calliber.
Did Heidi Klum model? Or just take in the show?
I have bought a few things from Guilt that are pretty far out for me. I do have 21 days to return, and I have returned some. Comparing what I have bought and what you are reporting is really fun. Guilt also did a NYFW sale today.

Oh yes I must compliment the photographer too. What a team you and Greg make, Angie!

While I agree that the Chakra collection is more wearable in real life, I find Irina’s combination of colors and textures much more interesting. I like that short gray swing coat with the feather design on the lapels in the second photo.

I love the creativity of this collection! It’s so interesting to see from where the designers draw their inspiration.

That dress with the skirt made out of feathers is really something. I can’t imagine an occasion where I would wear something like that, but I love the idea of it! 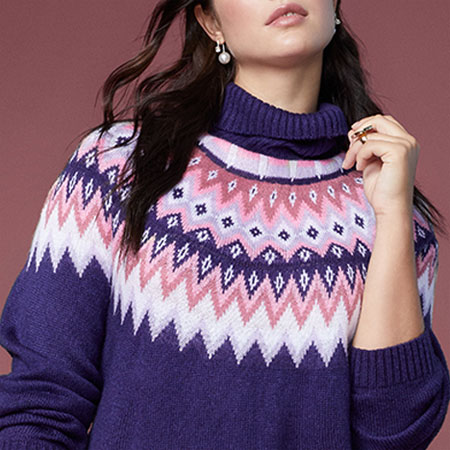