Your opinion on the rising hemline
Who’s wearing boyfriend jeans?

The Budget Babe asked a great question regarding last week’s post on loafers:

“Do you think you could explain the difference between loafers, brogues and oxfords? I get these styles mixed up a lot”.

Descriptions vary across the globe and around the Internet, but here is the way I would define these three styles and the differences between them.

Loafers are lace-less, slip on shoes with a moccasin type construction. For the most part they’re casual shoes especially when the soles are chunky and rubberized. But they can look smarter when the styles are more refined and the leather is dressy. The vamps and the heels of the shoe can be either high or low. 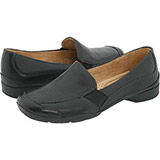 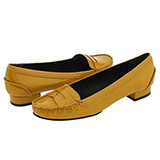 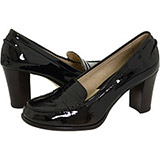 Oxfords are high vamped shoes with enclosed lace-up detailing. They can either be casual or dressy depending on the style. 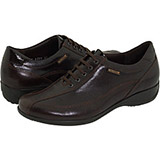 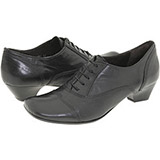 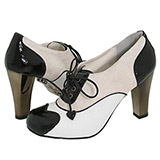 Above are three styles of oxford: casual and flat, dressy and low heeled, dressy and high heeled. 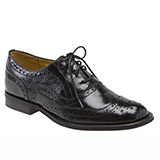 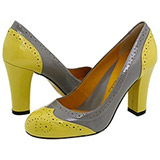 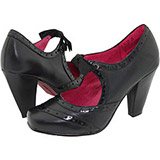 The style above left is an oxford brogue, while the other two styles are actually pumps with brogue detailing.

Another post chock full of delicious information. I love these styles! In fact, as an alternative to white DM boots which I can’t really justify in my climate considering I have plenty of boots already, I recently treated myself to the black and white Steve Madden brogues. I haven’t received them so we’ll see how they work out. These are all so incredibly yummy and I am actually wearing my black and tan heels with brogue detailing today. (Now I’ve got the terminology down.)

And I’ve got examples of all of these in my closet! Wow, I’d never really considered it before, but I must really love androgynous-looking footwear…

I’d also like to throw jazz shoes into the mix, which isn’t a term I hear a lot at home in NA, but is common here. I’d describe them as a close-fitting, flat-soled Oxford without the Brogue styling, often made with a soft, supple leather upper. My jazz shoes sort of “fall down” when there isn’t a foot in them to keep the shape!

I’m obsessed with oxfords AND brogues right now. Something about the look really excites me!

Thanks for the info Angie,

I’m in shoe love with the heeled oxfords and heeled brogues.

Brilliant, thanks for straightening things out for me Angie! So then it would be redundant to say lace-up oxford, correct?

Thanks Angie. Pre YLF I was familiar with brougues, but had no idea about oxfords or wingtips.

Angie, how could you do this to me? I had established a promise not to buy anything for myself until the day after Thanksgiving, and now I see those adorable shoes, all of which I love(esp the Hush Puppy black pump and the Harajuku Lovers Oxford, oh my). You are killing me

I did not know what brogues were even though my closet has a few pairs. Now I know, and I thank you for clearing up the confusion in my head. I am in love with the grey/yellow pair you posted…

This is brilliant! I assumed that all flat, menswear-style lace-ups were brogues. Had no idea the perforations were a prerequisite.

A-ha! So my Franco Sarto booties are heeled oxford brogues (and patent!), and my black boots are cowboy-style (that soft pointed toe like a cowboy boot) with brogue detailing. I have a lot of shoes with the brogue perforated detail, but I’ve only ever called them wingtips. Thanks for the explanation!

I guess I like androgynous style footwear too because I love most of the shoes pictured. I am really crazy about brogue styling and always just called it wingtip styling.
One question: If I wear a menswear inspired shoe do I not wear anything at all mens wear inspired with them? For instance, no moto jacket with the shoes pictured above?
Thankyou.

@Maya – if you don’t mind me jumping in – I always thought moccasins are loafers, Native-American style… made of really soft suede and trimmed with some fringing or pinking (i.e. zig zag trim cut that way with pinking shears)

I always wondered whether that near-relative of loafers is a dock shoe or a deck shoe? Which is it? I hear both!

Learned somethin’ new today. All this time I have been using ‘oxford’ when I really mean ‘loafer’.

Of course I don’t mind Aussie. I guess my confusion arises from the fact that these shoes:

were posted in the original post on loafers, when the description on Zappos says moccasin. I tend to trust Angie’s judgment more than website descriptions, which tend to be somewhat arbitrary. I’m not even sure if it really makes any difference, I am just curious.

Patience, I had the brogues you’ve ordered on my feet last week. They are fabulous! I have my eye on the white pair.

San, you could wear a few menswear inspired pieces together in one outfit – as long as it still looks feminine somehow. It would really depend on the pieces that you are pairing and how you are pairing them.

Maya, I regard a moccasin as the type of shoe that Aussie is describing. Thanks Aussie!

Thank you for the clarification Angie!! I absolutely love brogues, I just didn’t know they had a specific name! Someday I shall add these extraordinary shoes to my wardrobe. I’ve got to keep up with my dear hubby on this!

Great post, Angie. While I knew the difference between loafers and oxfords, I did not know that Brogues refer to a certain perforating style.

Thanks, Angie, for the primer on oxfords, loafers and brogues. Like others making comments, I didn’t know the difference between brogues and brogue detailing. Case in point as to why I love your blog so much! My favorite pair: http://www.shoezodiac.com/gemi.....gust-2009/

[…] Brogues are stunning. They’re not 8-hour walking shoes because the foot bed isn’t soft, but you might […]