Outfits Ensembles Trends Advice
Mixing stripes with other patterns, in both subtle and hectic combinations, is very on trend. Understandably, it might not be your cup of tea because it looks like mismatched chaos. If that’s the case, stick to mixing stripes with solids because it’s a slam dunk. But you can also mix stripes with colour blocked items as a halfway measure.The effect is not as maximal as pattern mixing, but more maximal than matching a print with a solid. 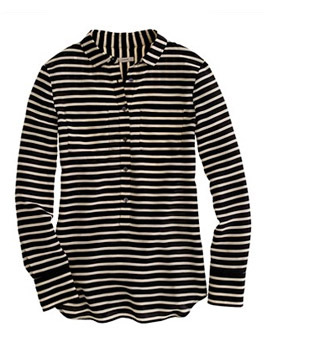 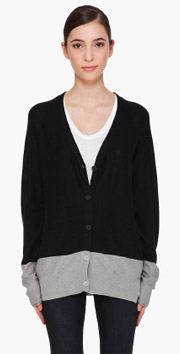 Stripes with a Colour Blocked Jacket 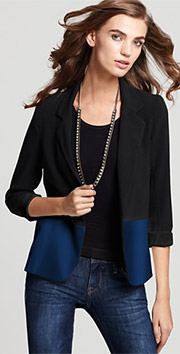 Stripes with a Colour Blocked Skirt 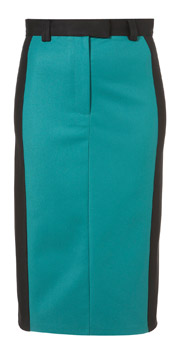 Stripes with a Colour Blocked Dress 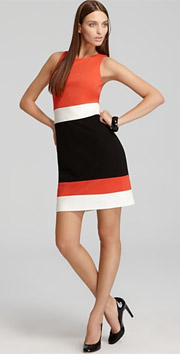 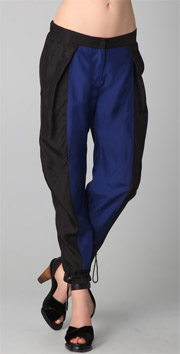 The colour black is common in each of the pairings to create a cohesive look. This is not at all a prerequisite for the formula, but the common colour denominator helps marry the two items together.

A simple two toned stripe, like the blouse, is one of the four patterns that I suggest for easy pattern mixing. You can substitute the simple stripe for any of the other patterns mentioned in that post and mix it up with a colour blocked piece. For example, pairing a black and white polka dot blouse would work just as well as the stripe.

I really like this pattern mixing and think it is something I would feel very comfortable wearing. Pattern mixing with black also wouldn’t take as far out of my comfort zone asit might if I tried this with colors (and no black). I like!

I would mix the stripe with black (not again) only….otherwise will look hedious on my petitie frame.

I can’t stop laughing at that last pair of pants — talk about a faux pas that’s now in fashion and that my eye will never get used to.

But on topic, I have a hard time mixing b/w stripes like that even with other colors. I like black/white patterns, but I seem to only wear them with more black or white. They are a separate little capsule in my wardrobe that doesn’t mingle with anything else. So I’d have a hard time wearing that shirt with even a colored skirt, let alone color block. I’m pretty sure this is a skill I need to learn.

I fret about having too much going on with pattern mixing, like fashionista does, because I am also very petite. But I am VERY fond of black and white stripes and I fear that I can’t go on living without that striped blouse. Oh goodness!!

I think I would try the bottom combination first. Great blouse!

Very inspiring! I esp like the first, very relaxed look, although the pencil skirt plus stripes would be a lot of fun for work. The trousers are such a NO for me, that I can’t get past them : >

This is a really fun idea, and you’ve laid out the elements in a very easy-to-understand way, Angie. I know lots of YLFers could pull this off with panache, but I fear I would not be one of them! I’m all for pattern mixing, but I’m going to have to take baby steps and start with some small patterns rather than such bold color blocking and stripes.

That said, I really love a lot of the individual elements here. That blue/black jacket, the color blocked skirt (love!), and the striped top you’ve matched with every outfit are all fabulous to my eye.

I think I would try all of these except the pants. I’m with Laura on the dress being my favorite and wondering why I don’t have them in my closet either.

I mixed my striped tee with my colorful argyle last week! Must now try my b/w polkadot shirt with my AT colorblocked grey/brown/black sweater. Easy.

I love this idea and can’t wait to get going with some pattern mixing in my own wardrobe. Thanks so much for the inspiration photos!

I love these – in fact, I havehad that coral/white/black sleeveless dress in my wish list for about two weeks now!

I love it all — even the pants! Big fun!

This looks like fun and a great introduction to pattern mixing for those of us who are dragging our heel with this trend. Love the color blocked sweater!

I’m having lots of fun lately with mixing patterns and especially stripes. (recent example on my blog). This graphical trend, featuring lots of stripes can continue for a LONG time as far as I’m concerned!

Deborah, you make an excellent point. Pattern mixing with black is a great way to keep you in your style comfort zone.

Cynthia, perhaps a black and white stripe is too bold for your pattern mixing style?

Laura! I thought of you when I pulled that frock to use in my post. The combination would look amazing on you. And you have me pegged! My favourite pairing here are the trousers and stripe and I also want to wear that outfit today. When are we having tea?

What a fun look. I love that Vince Camuto dress. I’ve been eyeing that since I first saw it at Nordstrom.

I like colorblocking A LOT more than stripes. I don’t know why I don’t like stripes, I just don’t. They don’t seem “me.”

Interesting combos, although I must admit I am not the biggest fan of colorblocking so I actually would find it easier to pair the stripes with another pattern, like a polka dot or floral.

LOVE these! I own that striped tunic, but for some reason, I don’t like the look of it on me. Sadly, I’m going to return it.

So this is how its done! I really like these examples. The black does tie it all together. The color blocked dress combo is KILLER. Thanks for today’s lesson, Angie.

Fun ideas! I don’t have a lot of stripes in my closet but would be open to trying this.
I LOVE the blazer, the skirt, the dress, and even the pants (not for me, but I know they’d look killer on you, Angie!)

I really like this, but I don’t think I have either element to make it happen. I am eyeing a colorblocked AT skirt that might mix with my cat print top, but only time will tell if it will sell out in my size. I have two striped shirts, but one is navy/teal (not the usual colorblock colors in stores) and one is a very bold b/w/silver. Oh well, I’ll admire on others!

You already knew that I would luv this formula, right? : ) I don’t own any colorblock pieces, but that will not deter me from coming up with a layered look. : P

I love that shirt but it will not work for me. I need to see if I can make this formula work. I have been eyeing that jacket.
I love this formula!

great formula for the pattern/print averse

Laura and Angie, may I join you for tea, and I’ll come wearing the color-blocked jacket? Wouldn’t that be fun! I am intrigued by the dress, and, in my head, am trying to imagine the two superimposed together. I really like the middle three. I also like the layout of this blog, Angie, and the way you’ve shown the striped shirt repeated on the left.

I love these ideas. I want to join the tea with the skirt combo.

This is a pure style preference but I fear the overall look may be too geometric for my tastes but I do know many people who would rock these looks with verve.

Oooh I like the top, the cardi, and the dress! What’s interesting to me is that despite being one who does not take a lot of risks when dressing, I find the idea of pattern mixing quite alluring. I know I’m not up for advanced pattern mixing, but I would like to play around with lite pattern mixing this spring. Thanks for the ideas!

RoseandJoan, describing these pairings as “geometric” is dead right. Good one!

Oooh, stripe and color block tea party! Imagine what a geometric and colorful sight we will be!

I honestly love it all, Angie. Stripes with solids, stripes with other patterns, and now stripes with colour-blocked items. I am in!-)
RoseandJoan, you’re so spot on, “geometric” was the term I was looking for. It’s a look I really love.

And that is going to be quite the tea party. Please ask Greg to take pictures!

The shirt in this post made me think of the striped blazers some forum members have. Such great ideas. I have nothing colorblocked in my closet but the dress is tempting if it were several inches longer.

Creative, interesting and modern. Those pants are the bomb. Add in the striped blouse and I’m in heaven.

Love this formula! Thanks for breaking it down for us Angie.

Thanks for giving us an easy formula for how to incorporate this trend. The stripe with color blocking seems very doable.

I am just starting to hop onto the pattern mixing trend, with baby steps. This is a great tutorial to help me figure this out. I think one key here is that the striped top has bery small stripes so it almost looks like a solid. If the stripes were really large, the contrast would be much higher. Now how NEAT is that color blocked blazer!