Fashion Week Day 7: LBD My Way
Your Style Evolution in Spring and Summer 2010

I grew up with the Gottex brand of swimwear. My late Mum wore the Israeli brand almost exclusively from the 70’s onwards. She swore that they made the best swimwear on earth! I followed in my Mums footsteps, staying loyal to the brand for nostalgic reasons more than anything else.

I have a vivid memory of shopping with my Mum for Gottex swimwear when I was a child in the 70’s. We were in a Hong Kong department store and I was getting very impatient with my Mum’s cozzie shopping. She promised that I could have a chocolate sundae if I held out a little longer. Apparently I was so well behaved that day that I got my sundae and I came home with a cuddly toy. That’s a great Gottex swimwear memory

We were thrilled to have fab seats for the show and I enjoyed every minute it. The designer showed both very over the top pieces and perfectly wearable items. It might not be obvious from the photos here, seeing as so much of it looks like stuff you’d never wear at the pool or beach. You’ll just have to trust me that there were plenty of classic and timeless suits mixed into the collection as well. 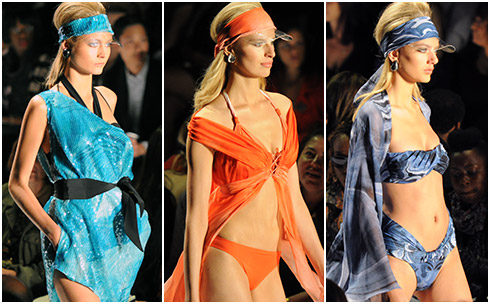 The collection showed a range of colours, from neutrals and pastels right through to metallics and brights. The swimwear and their cover ups were very tonal. I really liked that and it made me think back to my own Gottex bathing costume and wrap which is tonal too. A tonal swimwear ensemble is flattering to my eye. 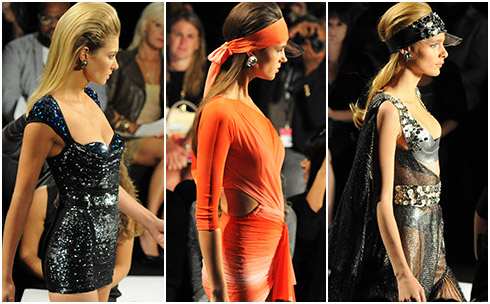 There was a subtle 70’s influence throughout the collection, like the frontal crisscross necktie detailing and tie dyed chiffons. But there was also an extremely modern techno mood. Amidst the delicate and matte Lycras and chiffons sparkled the most glittery of sequins and shiny lamé. Some of the beadwork was so shiny that it looked like little lights were flickering on the runway. Spectacular! 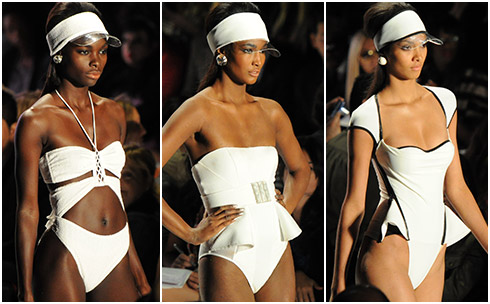 My favorite suit of the collection was the strapless white belted number with the little wings on the the leg openings (above middle). Not that I would ever wear anything quite so dramatic, but I really appreciate it’s strong and crisp design. 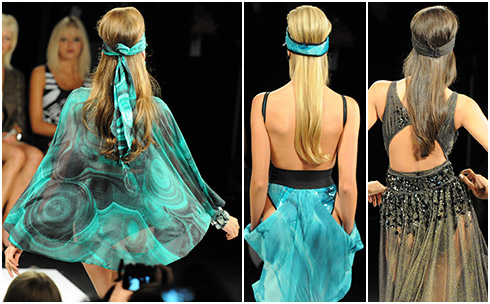 I enjoyed the Bridget Bardot hairstyles and the transparent peak caps. Somehow this gave a retro flavor to the collection, which contrasted well with the some of the space age fabrications. 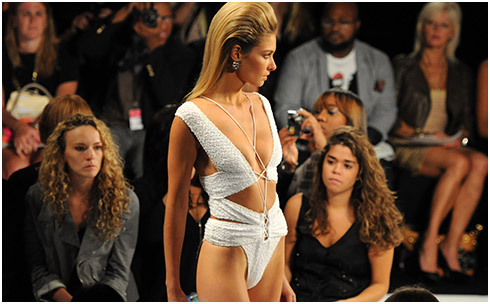 All in all Gottex was a very fun show to watch and I’ll be looking out for the practical styles in stores next year. As the last show on our schedule, it was a fabulous show stopper to fashion week at YLF. 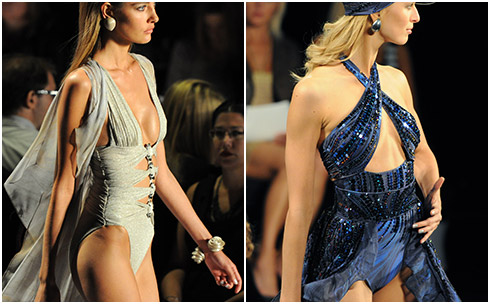 AWW! That Gottex memory with your mom made me smile! Glad the company’s NYFW offering kept the positive vibe alive!

Gorgeous swimsuits. I really like the top right, purple bikini in the first set of photos. The visors and hair are neat too. It’s nice there was a wide range of colors in the show.

How cool to see a swimsuit show in the midst of fashion week. I would wear any of the 3 in a row white suits in the pictures above if I had the body for them. They are my favorite.

Oh Angie, who could imagine the little girl bored of swimsuits would become a fashion writer attending a swimwear show. You are a such a credit to your parents!

CUTE and great colors… sigh, I am in a bathing suit 4 days a week– too bad it has to be a speedo!!!

I love the purpley blue bikini in the top right, and that taupey grey maillot on the left, bottom row is intriguing too. I’ve never heard of this brand but they look like fun

Love your Gottex memory
A swimsuit show must be fun to watch. None of the particular suits/outfits above tickle me in any way, but I do love Gottex the brand. Last year I tried several Gottex suits at Nordies and loved them. In the end I settled on a different suit, but Gottex definitely ranks high on my list of brands to look for when embarking on the oh-so-painful bathing suit shopping project…
Do love the hairdos!

Gottez did an amazing show considering the sometimes dreary opinion of swimsuit shopping that alot of us have.

Do you think that any of this will translate to a suit that has a lower leg opening all the way around? I’m hoping for a ressurgance of the suit that was much more modest there. The top can be what ever they want to design, but I wish we could get the coverage we need on the behind especially as we age and the buttox goes closer to the floor. Any way I made a long question out of this subject.

I’m so glad you enjoyed the finishing show. It looks to be fantastic fun, almost like belly dancer attire.

All I can think is, “poor Greg, forced to photograph gorgeous swimsuit models all day long!”

Your childhood memories plus the beautiful suits make this a special entry. Now I’m convinced that I need a swim costume with enough sparkly sequins that it will be all anyone looks at, not the body underneath.

LOL, Laura, and yes, must have been a real chore!-)

I always love reading about your childhood and your dear Mum, Angie. And that’s exactly the kind of thing I would have remembered too (anything chocolate-related…).

That white belted suit is gorgeous, I agree. I would love to see more of the tonal and metallic suits too. Oh, and I recently discovered that Gottex is available here as well, so I’m definitely going to have a look at their collection next time I need a new bathing suit.

Thank you again for the wonderful, wonderful posts about all the shows this Fall. I don’t know how you guys do it. I’m sure you barely had time to catch your breath, and yet all the pictures were stunning, your reports extremely professionally (yet with the – always appreciated – Angie touch) and you looked exquisitely fab every day to boot. I’m flying over to take lessons!!

Hm, I phrased that incorrectly, sorry.

Edit:
> (AND with the – always appreciated – Angie touch)

Love that this brought back great memories for you! The collection is wonderful. Neutral and colorful!

That white belted suit is just beautiful. Classic and elegant!

Thanks Laura. It’s a tough job, but someone has to do it.

WOW! I LOVE LOVE LOVE these. I spent all my summers as a child at the pool/beach and swam competitively for a long time so I guess I have a soft spot for swim suits

How neat to connect the fashion show to childhood memories with your mom. I can’t believe that some of the items in the show are actually meant as swimwear! Such a fascinating side to fashion.

Oh, how lovely that you got to attend this very show. Very interesting to see a swimsuit show, thanks for sharing with us.

Oh, one day I will find a great white suit like these.

So, is swim wear the last fashion hold out where matchy-matchy is acceptable?

I ADORE that orange swim dress in the middle. I would be perfect happy splashing around in that. Love it!!

Wow, these are some gorgeous swimsuits. I really like the last three ones – totally impractical, but oh-so-glamorous.

Absolutely divine collection. Take me away to the beach! I would just lounge and look fabulous. Get wet? Perish the thought!