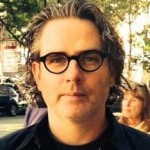 Angie introduced me to dim sum on our very first trip to Hong Kong together in 1998. There are many different varieties of dim sum, but most are some sort of steamed bun or dumpling. Our Chinese friends talk about going for “yum cha”, which can be loosely translated as having morning or afternoon tea. Except here the tea is accompanied by delicious dim sum.

This particular restaurant is One Dim Sum in the Prince Edward neighbourhood of Kowloon. The modest exterior would never have you guessing that the place has a Michelin star, but indeed it does, having first made it into the Michelin guide in 2011. To avoid the rush associated with its popularity, we arrived just before the quietest time of the day and our wait on the chairs outside wasn’t more than 20 minutes. 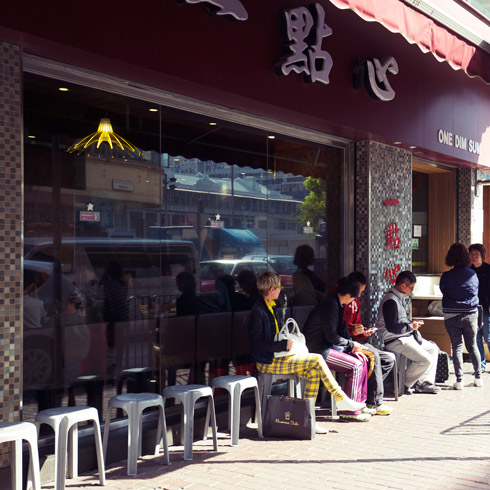 Dim sum itself is quite unique, but so is the restaurant experience. Traditionally, ready-made dim sum is wheeled around the restaurant on carts and restaurant goers take what they want from the cart as it comes past. This was the case at the famous Luk Yu Tea House, where I had my first dim sum experience. But here at One Dim Sum we noted our choices on a list and they arrived when ready. 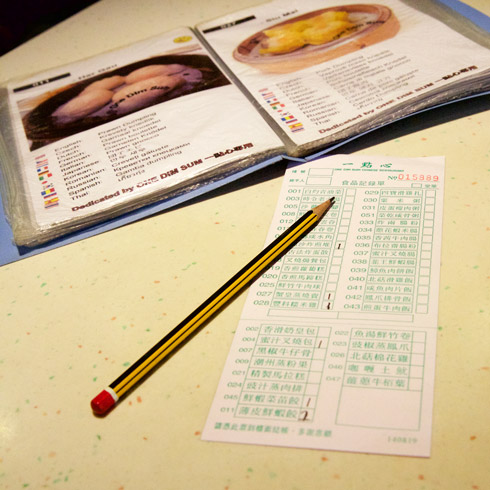 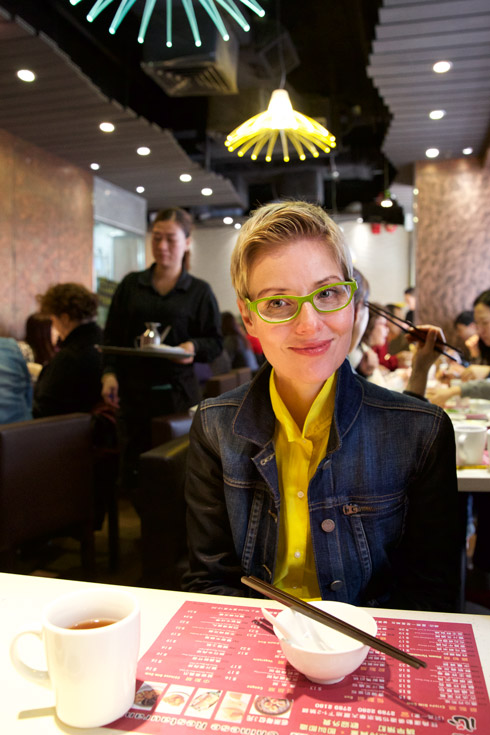 We were eager to see whether One Dim Sum lived up to the star and to the rave reviews it received from several of our foodie friends. In short, it did. I can’t remember enjoying dim sum this much. Top to bottom, left to right, we had Siu Mai (pork dumpling), Choy Miu Gau (vegetable shrimp dumpling), Cha Siu Bao (barbecued pork bun), Har Gao (shrimp dumpling), Law Mai Gai (chicken and sticky rice wrapped in a lotus leaf). Angie doesn’t eat pork, so those were all me, but she had an extra order of the Har Gao, her favourite. 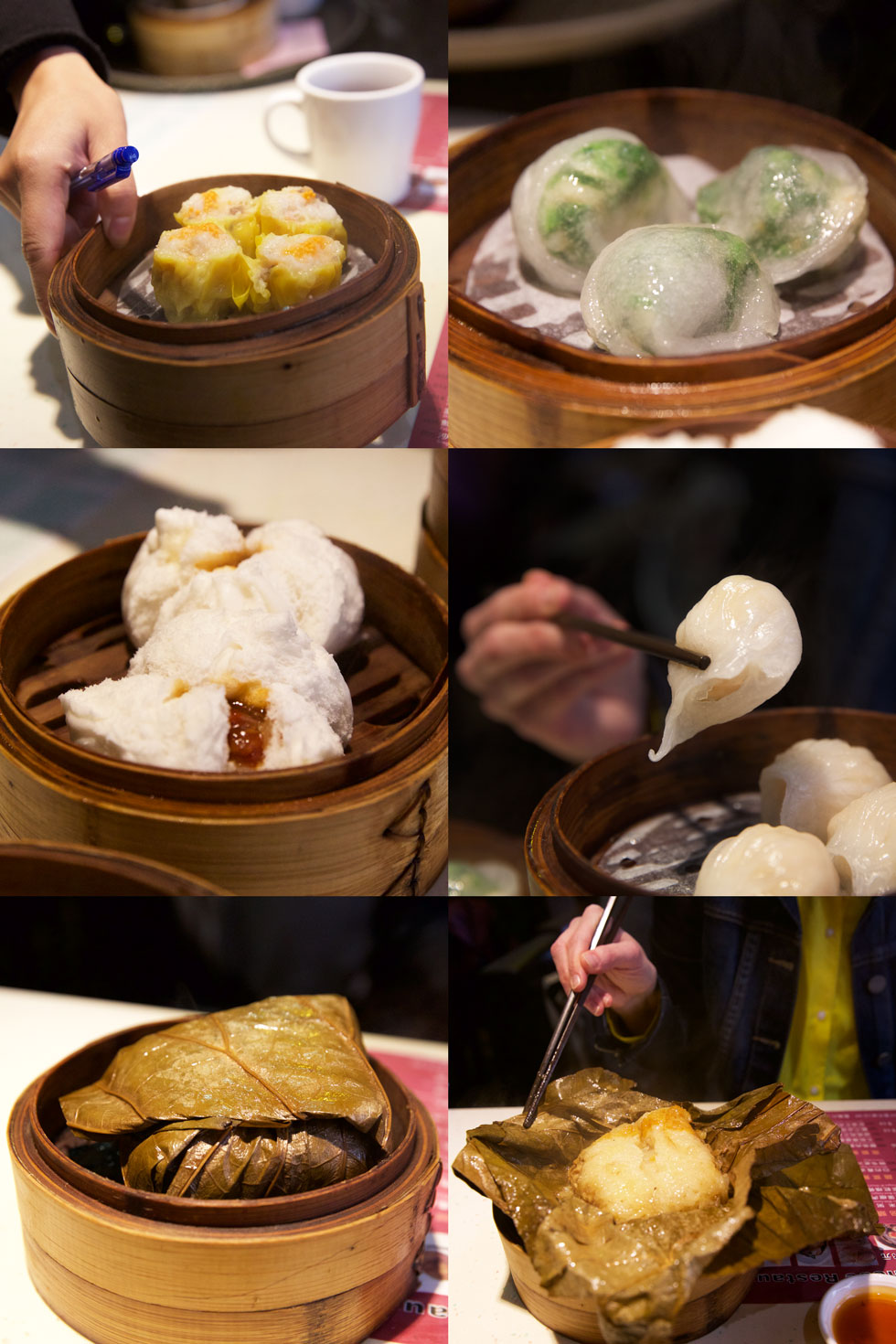 For dessert, it was all we could do to squeeze in some Lui Sha Jin Dui (fried mini sesame balls). 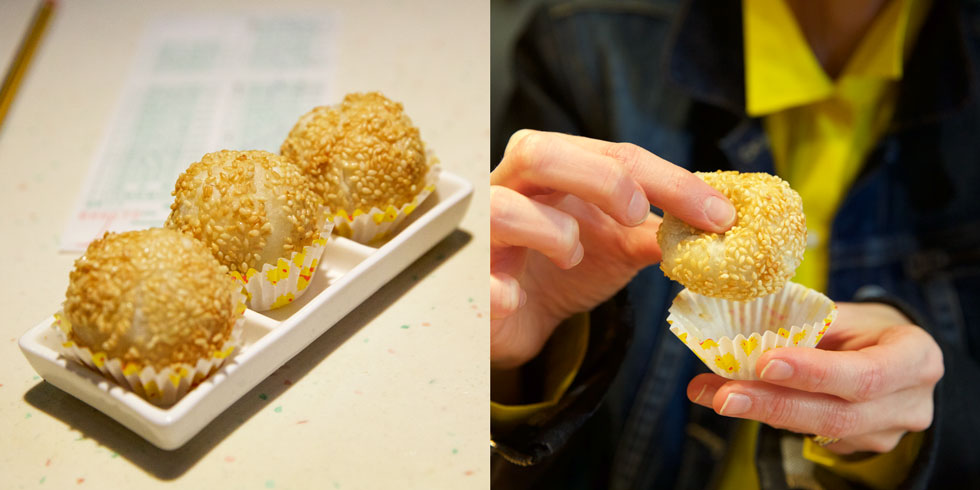 Unbelievably, our total bill for this one star Michelin feast was $20.

Thanks for this post, Greg. My husband’s family is from China and we’ve done the Denver version of Dim Sum quite often. But to actually experience it in Hong Kong is a dream. So glad you and Angie could do this and report back to us!

Looks and sounds delicious!! What a steal! Yum yum

This is making me really hungry. And I already ate. $20 is unbelievable. I actually recall Hong Kong as being very pricey, so is this a change since the Colonial days? Or is this place just that special?

There’s a dim sum place in San Francisco I’ve been going to for at least 15 years, it’s called Tong Kiang, not in China town, sort of out of the way in the Outer Richmond district. They have really great walnut cookies. Everything there is delicious but get there early like 11:30 and not on a weekend. Just thought I’d mention that if anyone from N. CA is reading this.

Oh, that looks so good.

Angie, I have to say that I love that shade of lipstick on you.

Yum yum yum. I love dim sum, although I do have to admit to a bias against places where you order off of menus. I think half the fun is spontaneously ordering things off of the carts. My favorite dish is cheong fun (the rolled up steamed rice noodles filled with meat or shrimp).

The food and setting both look wonderful. Thanks for posting this series from Hong Kong – I’m really enjoying my armchair travels.

It looks delicious! I’ve never had dim sum, but now I want to go out and try it right away.

Ooh, this all looks so delicious. Amazing that you can turn up at a Michelin starred restaurant and get admission after only a short wait (presumably without having booked first). Thank you for these yummy reports, Greg.

Not fair! This is so NOT the right post to read at the end of the work day when I am hungry!!!
You guys are definitely having a ball in Hong Kong. Beautiful pictures Greg!
Thank you for sharing this great experience with us.

Thanks for the spectacular description and photos! My husband raves about the dim sum he had in Hong Kong, so it’s nice to have a visual to go with his stories.

I’m getting hungry looking at these pics myself. It was the BEST dim sum we’ve ever had.

Cocolion, Chinese food is generally still inexpensive in HK. And thanks for the recommendation in San Fran.

Ruth M, quite right. You can’t book at this restaurant. We deliberately went at their quiet time – 3 to 5pm – which was a good idea. Only a 20 minute wait.

My husband and I ate there when we were in HK (first time for me, despite growing up in Singapore) late 2013. It was seriously the best dim sum I have ever had in my life – and I’ve eaten lots of it! The bill for the two of us was $15. Crazy. Your HK posts are making me yearn to go back there – I absolutely love that place.

I am so jealous! Yummy.

You are killing me! Law Mai Gai and Lui Sha Jin Dui are two of my favorite things! (Sticky glutinous textures, so yummy.) Please keep the food pictures coming. I feel like I’m sharing in the feast, at least a little. You and Angie are the best for sharing this experience with us.

love har gow! I’ve only had dim sum from the cart – it can be rather stressful as you are never sure what’s coming around. Ordering from a menu would be wonderful – especially at a Michelin star restaurant.
Question for Angie – what’s in the Massimo Dutti bag??

Looks wonderful and I am glad you are having such a good time.

Firstly, you are making me hungry Greg. Secondly, I am so enjoying your stories and photos from Hong Kong over recent days. I love the place and am enjoying revisiting via you two. Enjoy Valentine’s day together!

I couldn’t resist ordering in Chinese food after reading this post and seeing all the wonderful pics of these goodies:-)
Everything looks so delicious, Greg, and my mouth was watering after reading your descriptions and then studying the photos. One Dim Sum sounds amazing, and a $20 meal in a Michelin star restaurant, wow! It’s definitely on my list of go-to restaurants if I ever make it to Hong Kong.

Thanks for sharing your food adventures with us.

Greg, Thank you for an absolutely delicious adventure in Chinese One Dim Sum…and at a Michelin one star as well…I enjoyed the lovely photography, seeing our Angie, jean jacket and delightful desert was a treat in itself…
I am so glad you two are having this adventure…You add to my day by your wonderful shares..
Above all, travel safe and don’t forget to come home…smile..

Greg, thank you for these fabulous pictures. I’m starving and would rush out for dim sum, but we’re all sitting tight waiting for the next blizzard to arrive.

Greg- many thanks for the delicious descriptions and beautiful photos of your dim sum. It looks amazing- I am with Angie leaving the pork dishes for you! I have yet to enjoy a Michelin starred restaurant for $10 a person; didn’t know that was possible.

Glad to see how much fun you are having!

Thanks for sharing this! Dim sum is one of my absolute favorite things to eat and experience. I’ve never been to HK and I hear–from the friend who introduced me to dim sum–that HK is where you can find the best dim sum in the world (and he’s been around Chinatowns the world over).
These dumplings do look very exquisitely crafted. Also, I love the happy pop of yellow in Angie’s outfit!

This is a fantastic post from you, Greg, our other road reporter and it’s so nice to hear from you and learn through your eyes and experiences, too. Angie looks beautiful and the dim sum looks delicious, but, I, too, would be eating what she’s eating. The final bill was a total shock, and a pleasant one! Have fun!

I hope you get to the Nan Lian Garden and Chi Lin Nunnery while you are here. Go to Diamond Hill on the MTR on a nice clear morning, unlike this morning! They open early.

So jealous. Looks divine. I don’t eat pork EXCEPT for Cha Siu Bao. I would also fight Angie for the Har Gao! Ok we’d just have to order more. I think I would miss the lovely ladies wheeling their carts around, but maybe not..

We are not alone in enjoying good Dim Sum.

DianeHK, we’ve been to the Chi Lin Nunnery already actually – a few HK trips ago.

I have never had a Dim Sum in my life, but yummy picties! Sounds (and looks like) very exotic and delicious to me:-). Love the yellow shirt with the green specs, Angie!

Oh, and it’s a real treat to read Greg’s writing! Makes a great change for how we girls percieve the world:-).

Great to hear from you Greg!

But we want to know what you are wearing

Looking forward to more of these fascinating posts!

That food looks quite yummy but I mainly just wanted to say I looooooooooooove those plaid pants, Angie!

How did I miss this? That looks so delicious. We are huge dim sum lovers in our family and just enjoyed some pre-New-Year steamed yummies ourselves on Sunday!