Spring Mom on the Go: flop proof outfit #4
How to dress the racy rectangle body type, 2010

and Valentino: The Last Emperor

. Lagerfeld Confidential offers a present day look behind the quirky and charismatic man who heads up Chanel. The Last Emperor traces Valentino’s life as he prepares for his final couture show.

Getting a peek into the world of couture is fascinating, but getting a glimpse through the eyes of Karl Lagerfeld and Valentino Garavani is something else. Both in their 70’s, these men have the biggest egos in the world. But as much as they are eccentric, high maintenance and extremely opinionated, they are also intelligent, very talented, mega wealthy and quite a scream. You might not agree with how they view the world, but their perceptions and way of life make for interesting and captivating documentaries.

I have many favourite parts throughout both documentaries. Lagerfeld’s obsession with wearing 20-30 rings and his sincere respect for his Mother were enchanting. Valentino’s adorable five pugs who accompany him from private jet to sewing room made my heart melt.

But my favourite part of all was in a scene towards the end of The Last Emperor. Lagerfeld, who was one of the guests at Valentino’s final couture show, went backstage to congratulate Valentino on his marvelous achievement. After publicly congratulating him, he then pulled Valentino a little closer and whispered to him something to the effect of: “it’s only you and me who make beautiful clothes, the rest of them make rags”. And Valentino lovingly agreed. 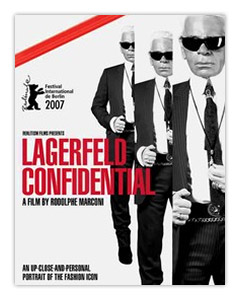 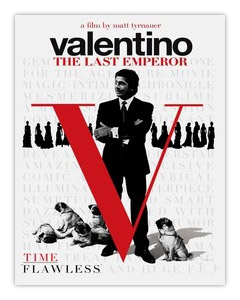 So funny!! I literally just watched Valentino: The Last Emperor last night. I really enjoyed getting a look into the world of “high” fashion and haute couture – but I have to say, that I found it unfair that though Valentino designed all of those beautiful dresses – he didn’t make one of them – it was all the seamstresses who did the actual hand sewing – and yet he is the one that gets all the credit. Yes, an idea, a design is a great thing – but it would only be left on paper if it weren’t for the actual work put into it, so why don’t the seamstresses get equal credit and fame? Did he hand-sew his dresses earlier in his career or has it always been that way – that was one of the questions that I came away with. But agreed, I did love the part between Lagerfeld and Valentino – it was priceless.

thanks for the suggestion! I’m curious already!

Are these documentaries in the theatre or on DVD?

totally agree!
rute & meredith2 – I saw them on DVD – netflix had both! I went on a ‘fashion documentary’ spree a while back and also watched “the september issue’ which is on par with Valentino & Lagerfeld in it’s own right.

personally, I loved Seamless (also on netflix DVD) even more – as it showed behind the scenes of choosing the CFDA/Vogue Fashion Fund designers. Young, talented (and starving) and it was refreshing to see emerging talent without quite as much ego or drama. Very inspiring and fun to root for the underdogs of fashion!

Angie – thanks for the review – I’ve seen The Last Emperor and was wondering about Lagerfield Confidential. And I too would highly recommend “The September Issue” I really enjoyed it!

oh goodie! love movies about fashion – I’ve watched everything “Chanel”, and was wondering about these other designer movies – great recommendations for my list. Thanks you movie and fashion mavens!

Meredith2, these documentaries are available on netflix.

I’ve seen the September Issue and it was excellent – so was Coco before Chanel.

Interesting…thanks for the recommendations!

Thanks Angie, I will be all over this:)

I just added both to my Netflix queue. Of course, my queue is about 600 movies long, but at least I won’t forget about these documentaries, even if I don’t get to them for another year or two.

These documentaries are certainly on my list of things to watch, thank for the recommendations Angie.

Just added the Lagerfeld doc to my Lovefilm queue. Andrew really likes Karl so I know he’ll watch it with me The Valentino hasn’t been released here (and it doesn’t look like it will be), so I might have to wait on that one for a while.

i love watching documentaries on the inner workings of designers….i saw shows on both Chanel and Louis Vutton….I had no idea how old the Louis Vutton label has been around.

looking forward to watching the Lagerfeld and Valentino….thanks! ^__

I tried watching Valentino the Last Emperor. I went into it with enthusiasm because shows about fashion usually leave me inspired. But I have to say that I couldn’t get through the documentary. I found him to be so elitist. I don’t mind couture but why does it have nothing to do with women? Why must the women who wear the garments be skinny twigs that fade into the background? His dogs get better treatmen and are more parmpered than any person I know. And he hardly touches his clothes, I do love his seamstresses though, they’re the ones who make everything happen.

I can’t wait until we have an anti-designer. Someone who embraces women as their inspiration. Wouldn’t it be incredible if someone did a show with skinny robots? Or have the clothes parading down the catwalk suspended on clothes hangers to parody the shrinking women in the fashion industry?

I can’t wait to see this movie!!

Instead of Coco before Chanel I´d recommend “Coco Chanel & Igor Stravinsky”. It´s less Hollywood-ish and shows how these two revolutionaries influenced each other, and also had an affair

Thanks for the recommendations, Angie! I’ll look for these.

I *loved* the Valentino one. Highly recommended! I’m going to check out the Lagerfeld. Thanks for posting!

Hmm, I have never been a fan of any documentaries, but these make me intrigued. I will have to see them at some point.

Angie – unrelated question but didn’t see a link to your e-mail address . . .would you share some of the fashion show invitations with us? It would be interesting to see the different stationery looks and styles from the design houses.
Thanks!