Milan is home to some of the most famous fashion brands in the world. Top Italian fashion designers from houses like Prada, Valentino, Armani, Versace, Missoni, Moschino, Etro, Trussardi, Mui Mui, Gucci and Dolce & Gabbana live in Milan and their companies are headquartered in the city. Because of this, you’ll find flagship stores stocking the very best of their collections all over the city. For example, in the space of two blocks, there were five Dolce & Gabbana stores. And one of the Armani stores took up an entire city block and was four floors high.

The concentration of Italian designer stores around an area known as the quadrilatero della moda (the fashion district) is incredible, and they all seem to do good business. I went into a few of my favourites on home ground just for fun. The service was exceptionally good and I enjoyed soaking up all the luxury at such close range.

Valentino: Valentino is my favorite Italian designer. His bags, shoes and clothing are romantic and elegant in a very modern way. The technical expertise of their pattern makers blows my mind. It’s extremely hard to immaculately sew intricate designs in slippery fabrics, but Valentino’s results are flawless.

Versace: This house is polar opposite to Prada because the merchandise is glitzy, over the top and very bright. I’m not generally into Versace style but their window happened to be my best in Milan. I’d wear that sheath dress in a heartbeat but leave off the shoes. Seriously, those are the highest heels I’ve ever seen. Crazy. 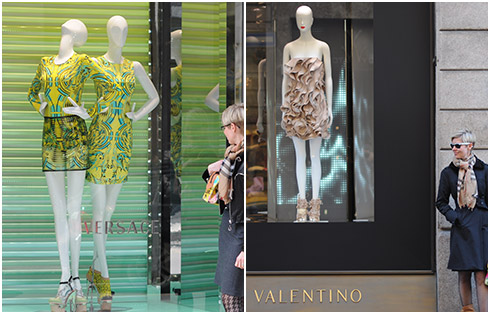 Prada: I’m not overly fond of the minimalist clothing style that is characteristic of Prada for women, but their handbags, footwear and menswear collections hold my attention. I enjoy the sleek lines, neutral colours and practical designs. I find Prada boots especially appealing because they are usually utilitarian in style, flat heeled, beautifully made and very comfortable.

Armani: The Armani Empire is massive. With a firm foothold in both mens and womens fashion, you’ll find the Armani label on home wear, hotels, cafes and restaurants. You’ll even find Armani book stores. Their clothing is an interesting mix: the ladieswear is often androgynous while the menswear is effeminate. Ironically creative. 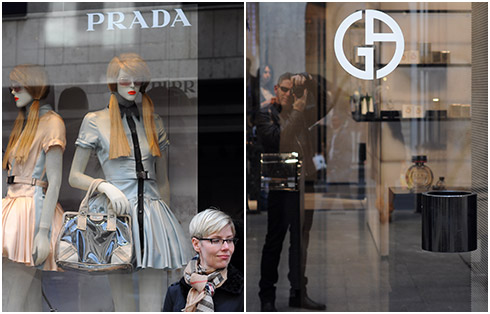 I’m not brand conscious, but I do enjoy superb quality and unique design, which is often what sets apart designer merchandise from mainstream merchandise. Designer items are like works of art. And I am a great appreciator of art, so I appreciate luxury brands in the same way. I can absolutely respect the creativity and impeccable craftsmanship that goes into designer items, even though the prices are exorbitant.

With exorbitant prices comes exclusivity, making designer goods a status symbol. I don’t think that there is anything wrong with that if you have the money and it’s your style, especially if you mix up designer items with mainstream and vintage goods in one outfit. Some people shop designer whereas others shop budget, and it’s all good in my book. What is often the case, and we saw a lot of this throughout Europe, is that people save up to buy designer items, pay cash, and wear them for years until they fall apart. Shabby looking Chanel and Prada bags, and Gucci shoes are not uncommon. So instead of purchasing ten handbags or pairs of shoes, people will purchase one item and whittle down the cost per wear to nothing.

There are also many busy outlet stores in the city center. They sell last season’s designer collections at half price. They are pretty well organized, clean and neat. I traipsed around a few but came out empty handed. If you have the patience to visit these designer outlet stores frequently, you’ll probably score big time. Don’t expect bargain basement deals though — half price is still expensive with these designer items. 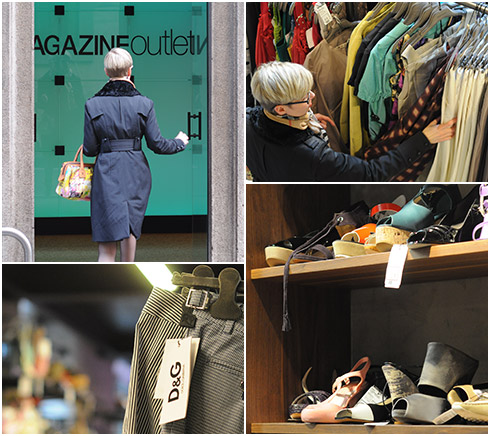 You don’t need to shop designer or outlet in Milan because the city is also full of more mainstream Euro stores like Benetton, Diesel, H&M, Zara, Promod and Etam. There’s something for everyone. When I was there last week, the windows were thankfully starting to change as the abundance of mushroom toned merchandise was being swapped out for brighter colours. Harem pants, camouflage, ditsy florals, safari inspired designs, denim on denim, strong shouldered tops, ruched sleeves, drawstring tops, cropped leather jackets, ankle length pants, wedged sneakers, ballet flats and soaring cage heels ruled the store scene. There was absolutely no sign of the low heel footwear trend in Milan. 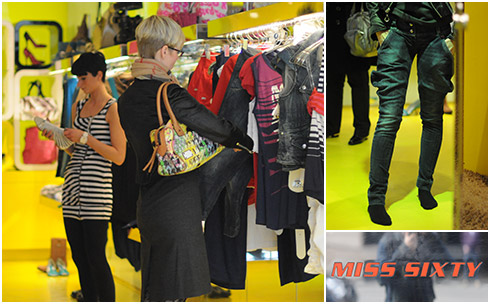 I kept my shopping to a minimum, bringing back four items in total. I bought ballet flats in Arnhem, a black, strong shouldered blazer in Amsterdam, and a pair of flat, knee-high ivory boots and jodhpur jeans in Milan. My jodhpur style skinny jeans are extra edgy and will be an acquired taste for sure. But I absolutely love them and it’s especially fab that Greg spotted them first. I bought them at a British store called Miss Sixty. No prizes for guessing that I was hopelessly attracted to the colour of the inside walls of this store. That’s me fitting on the jeans in the store (I was too lazy to take my sheath dress off so that’s my top looks bulky). I’m very pleased with my scores and have worn the jacket a few times already. I plan to wear the jeans and boots this week and the ballet flats as soon as the weather warms up.

This was sooo great to see. The shopping was as I thought it would be. I only wish I was there too!!

My husband and I are going to Europe this summer, so keep up the great overseas posts! (I do love Miss Sixty and have a pair of their shoes purchased here in the States. ) One store I am most looking forward to shopping in is Repetto!

The shopping looks amazing! I can’t wait to see your new purchases come out to play. Thank you again for the wonderful travel posts!

Love racy rectangle you in those jodphur jeans! I’m with you on Valentino being a favorite. There’s something so lush about the designs, and so modern and crisp and on trend at the same time. But the Versace dresses in the window — oh my — the colors are so you!

Another fabulous fashion-travelogue, how fun. Love the glimpse of the photographer’s reflection in the store window Angie, I can so see you in the Versace sheath dress, I’m surprised you didn’t give in to its calling your name!
I’ve never been to Milan but would love to experience it. Thanks for sharing!!

Oooh, I love the jodhpur jeans. I’d be curious to see if I could pull them off as well as you do, though the likelihood of me finding a pair is quite slim. Sounds like you came back with some amazing loot! I am jealous that you have yet another pair of white-ish boots

Thank you for such a fascinating post – I loved the mix of your impressions of the higher end vs more mainstream fashion!

Oooh, those jeans look surprisingly wonderful on your slim hips and toned thighs! I’d have to give them a pass but enjoy seeing them on you. I look forward to seeing your other 3 scores in future posts. Thanks for giving us such detail of your own personal shopping; I’m quite a private person and believe it is a true gift for someone to be so open about where she went and what she acquired.

Oooh, I’m all anticipation if and when you decide to share your jodhpur jeans modeling pics, Angie. I’m salivating about the equestrian inspired possibilities and how you would style them.

I also appreciate the quality and especially superb design of high end items. I don’t own anything like that, but I like to window shop if I can. Of course there are exceptions. For example, Versace’s aesthetic doesn’t appeal to me and looks too busy and sort of cheap (from what I’ve seen).

Angie, you look terrific in all the pictures!

Can´t wait to see you in your new purchases!!

Miss Sixty is fun!! They have amazing coats.

I´m totally with you that the low-heel trend seems to pass Europe. I haven´t yet found a fab pair, most of the chic designs are still very high heel.:(

Angie scores again!! Those jeans are deliciousssss, wow and you look terrific in them just trying them on! I know you must already have at least ten different looks planned for them. Can’t wait!

It comes as no surprise that Milan is a shoppers’ paradise, and I really like your designers overview. Very handy.
It also seems that there are some pretty fantastic vintage and second-hand stores around. I’ve never had much luck buying second-hand here, but I would sure like to give it a try in Italy;-)

P.S. Love Greg’s reflection in the window, and I’m still so smitten with your trench!

Hope we get to see pics of your scores soon Angie – can’t wait!!

So cool to read this! I really hope to go there shopping one day. I have heard there is an abundance of boots for very narrow calves in Italy.

[…] I’m officially wearing low rise jeans again. Greg saw these jodhpur jeans on a sales assistant in Milan and fancied the way they looked. As a lover of equestrian style, I instantly fancied them too. […]