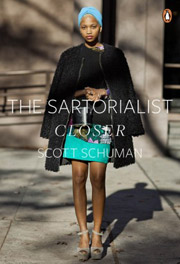 Street style blogs popped up on my radar about four and a half years ago, around the same time that I discovered YLF. So many different people with very diverging style preferences, each putting together outfits that tell us something about who they are without having to say a single word. It still delights me no end.

Over the years I’ve noticed that the outfits that really stand out to me, the ones that I file away for future reference, often fall into these five categories. Five very different categories, but all of which have at some point helped me get unstuck when I was in a bit of an outfit rut.

How do you use street style photos? Have you perhaps noticed certain patterns? Do you also have an inspiration “classification system” or do you go about it more randomly?

In his second book, The Sartorialist: Closer, Scott Schuman shares a new compilation of street style images snapped all over the globe. As is his habit, he mixes action shots of famous fashion figures with photos of people from different walks of life, always with one goal in mind: “to bring him closer to the true essence of the person while still capturing them as stylish subjects”.

Street style is theatre to me. I rarely copy a street style look but apprecaite that moment in time captured.

Inge I love street style and I am impressed with how you have thought this through and processed it into these 5 categories. I am often inspired enough, by things I see on street style blogs and actually on my own streets, to incorporate them into my outfits.

Wonderful how you broke this down. I don’t read street style blogs other than sporadically. I look at Sartorialist occasionally but like Bill Cunningham’s work better as it focuses on one element and shows lots of quick examples of that. I like the new-to-me concept street style blog http://blog.stylesight.com/street because it takes an element and shows a few examples of exactly that. Though I mostly don’t care for most of them and it’s a quick way to reject trying out lots of looks (I’m very experimental and see clothes as ideas, firstly).

I do look for how-it’s-done items.

I mostly see clothing through a prism of silhouette. So that photo of the older woman you cited is : long scarf reigned in as a full skirt would be, over pants, topped with long, loose, limp layer.

I do the same thing as you in admiring someone’s style though it isn’t one I can use.
I tend to do that with the few WIW blogs I read. I’ve noticed that I am often preferring someone’s style that I consciously know I can’t duplicate because I am precisely opposite to them in physical nature. I love to look at what Girl With Curves has done and I have totally different stature, hair, coloring, shape. I like J’s Everyday Fashion for her color mix and how, for example, her bag picks up her skin tone. But she’s incredibly tan to the point that her skin is a definite part of her palette. I like exactly the palettes she chooses but in no way would they look the same on me and it wouldn’t give the same effect if I replaced her items with blush tone ones and I couldn’t find anything that would vividly, colorfully contrast with my skin tone.

I do try to search out women who have the same physical posture I do, in order to get an idea of whether I would like similar outfits. I tend to think that posture, carriage is everything. So when I see all the cliche pigeon toed poses or the ethereal lost in the dream world poses, they’ve completely lost me. I guess I’m looking for some part confidence and some part gracefulness. Alternatively, a physical confidence as in spunky readiness. I suppose I think that with the right attitude for oneself, one can wear anything successfully, though not necessarily aesthetically.

Thanks! Such an appealing post. It is fascinating to see the sources of your inspirations after seeing the final results. You are so creative and refined in your creativity. It’s also educative to witness your solid sense of your own style. Thank you!

I’ve read this post a few times now Inge and realize based on your categories, that I really should start checking out some street style blogs. To be completely honest, street style mystifies me and I almost find it overwhelming since I often don’t know what I’m really looking at. Your categories are super helpful and now I think I can gaze at some of these outfits in a more discerning manner and hopefully, learn something that I can apply to my own style or just appreciate from afar. Great post!

I love the way you broke down your street style classification system, Inge! That’s clever

I am extremely inspired by street style – both on blogs and on the streets. More than anything else in fact – street style inspires my own style.

I love to pin street style. I pin outfits that inspire me in one way or another – whether it’s the colours, combination, or a particular item – either for myself, our YLF readership, or my clients.

Pinterest has accelerated my love of street style. I used to copy-paste pictures and put them in files on my computer, it’s now so much easier on Pinterest! I too have several categories: the biggest one is wardrobe inspiration. These are looks that I would in some way copy, even if the final outcome is quite different. The second category is my imaginary lifestyle. I admire the look but have no elements in my own closet, nor the lifestyle nor often the budget to pull off said look. I love looking at blogs from around the world (India, Romania, Spain) as well as blogs featuring casual style. I like to pin style icons as well, old and new, and I am especially inspired by old rock and roll pictures which inform my style in the most abstract way. I tend not to look at the usual blogs like Atlantic-Pacific, the Sartorialist, Man Repeller etc. I don’t know why. Maybe I’m just an underdog loving person.

I’m in the “Angie camp” as far as using Street Style for inspiration. A lot of my pins come from Street Style pics and I choose how to interpret them for me. That’s why I’m obsessed with Pinterest. I said to my husband just yesterday, “You know, I guess I really DO have a very clear style viewpoint of my own!” (and he looked at me like I’m from outer-space…)

I don’t follow the street style blogs but I do follow and take inspiration the style I see on the streets around me. I get so many ideas from strangers and peers alike!

Inge, firstly thanks for the eye candy. Secondly while I enjoy street style somewhat randomly, I found myself nodding my head as I read your classifications. And I agreed with the photos and why you chose them. I so LOVE that suit with the trim.

I love the thoughtful way you have broken this down. I go through periods where love to look at street style. I had pinned your #1 on to my “interesting women” Pinterest board:)

Inge, thank you so much for sharing your system — this is really helpful for me! I think I’m finally starting to really take advantage of Pinterest, and I’m going to use your categories as a starting point for categorizing my pins more effectively. I love checking out street style blogs and collections, and Denise, I’d love to see which ones you follow from around the world!

Thanks for sharing your system, Inge. I find it so helpful and will refer back to it. My daughter gave me the first Sartorialist book as a gift. Maybe I will get lucky and receive the second this holiday season!

Thanks for an intriguing post!
Vildy, I just lost myself for a little while in the stylesightings blog that you linked.

Great and helpful post and I love your links! The loafers and trousers in #4 are out of this world. I love street style blogs, particularly real people without endless budgets. My favorites have been your #1 category. I love to try to analyze why a certain look is so much more integrated and outstanding than the others. But I am trying to pay more attention to the other categories so that it is not just a theoretical exercise.

I love the way you broke this down. Very interesting.

I’m trying to think what I make note of. Occasionally, I will see a look so fantastic on the street that I’ll make an annotated sketch of it. So, I would say I probably pay most attention to whole outfits, 100% ready to copy cat. Not so much color scheme or outfits I’d tweak. Maybe I’ll make note of a particular item – a sweater or purse, but I forget those pretty quick I suspect.

As for striking fashion personae not my own – well, I feel I’ve seen the pinnacle and that’s that. I saw this couple at the ballet in full on Mozart – powdered wigs, white-on-white embroidered satin. Nothing, and I mean NOTHING, gimmicky about it. It was done not seriously but normally. Perfection. All else is costume ;>

What a fantastic and well thought-through process, such a pleasure to read. I can immediately adopt all these categories, and will give a thought whether I need to include a category of my own. In any case, it’s a fantastic starting point and very welcome to make things simpler to sort through for myself.

I don’t use pintrest very much, I just find it too visually overwhelming at the moment, but I use Google Reader to keep an eye on my favorite, or newly discovered, blogs.