Teaser: 4 Must Have Items for Spring 2012
Describing Your Style Persona

Having the first Book Nook post of 2012 coincide with kick-off day for our second YLF Book Club meet-up feels very fitting to me. As it turned out, our first Book Club title, Parisian Chic, generated lots of discussion. Opinions differed greatly and it was good fun thrashing things out on the forum. The book certainly sparked new interest in items that author Ines de la Fressange names on her list of essentials: the navy V-neck sweater, low-heeled loafers (a big trend this season), a striped tee, leather jacket and a versatile blazer. But there was more to it than that. Her style advice and the conversations that ensued clearly struck a chord with many YLF readers, and actually inspired some of us to start the next leg of our style journey. From incorporating that certain je-ne-sais-quoi element into our current wardrobe or use the “Magnificent Seven” as the basis for a complete style make-over, to thought-provoking discussions on what exactly constitutes tomboy style and why dressing in a classic way sometimes still gets a bad wrap. This book had us rethink topics that carry over from one year to another, and contemplate where we would like to go next. 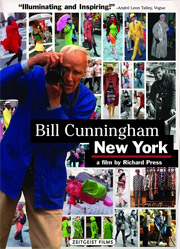 This month YLF Book Club is all about the beautiful documentary Bill Cunningham New York, an ode to the New York City based photographer who is considered to be one of the pioneers of street style and continues to daily document trends and creative dressing in his inimitable way. I found it very moving and uplifting to see that in all those years Mr. Cunningham has never compromised on his ethical and artistic views, and how he is still the happiest with camera in hand, snapping pics of people who are obviously enjoying getting dressed in the morning. Now that’s what I call having fun with fashion on multiple levels!

We can’t wait to hear what you thought of the movie. What’s the one thing that stuck with you the most? Have you started taking more of an interest in street style reportage after watching it?

Quick reminder: On the Book Club page you can find the schedule of previous, current and future Book Club titles.

Looking forward to getting a copy of the documentary soon!

Oh that sounds like my kind of film, having done (and currently doing) street photography as well. Will check out some of the future book club titles so I can order en masse on Amazon.

I can’t recommend the documentary about Bill Cunningham enough Inge, and tell everyone to see it. I was so incredibly moved by watching it that it stuck with me for days thereafter. The gifted and obsessively dedicated man is one in a billion. What he accomplishes is incredible – but to still be doing it with gusto and discerning eye at age 84 is nothing short of miraculous and mind blowing. To say that I am in awe of this man is an understatement. WOW cannot even begin to cover it.

There are many wise words to remember from the one and only Bill Cunningham. But what stuck with me the most is when he says that the real fashion show is on the streets, and not the runways. It’s SO TRUE.

I was fascinated by this movie.

I didn’t know anything about Bill Cunningham going into this movie and leave extremely curious about Bill as a person.

I absolutely loved montages of Bill’s work and watching him work on the streets. As someone who regularly “connects the dots”, it was great to see him pick up themes from the street to tell the story of what was trending each week on the streets of the city. I loved that he looked at street fashion, high society, and the designers and fashion shows. One of his main points: I look at the clothes, I don’t care who’s wearing them was wonderful. Him comparing what a model wore on the runway to how an everyday person then translated that outfit on the streets also struck me. I remember this image where all the paparazzi were rushing to take pictures of some star and not Bill. He said, she wasn’t wearing anything interesting. He’d rather shoot the shoes of someone walking by.

Rising above the fashion aspect of this, I was very intrigued by how Bill approaches his work with very, very strong boundaries. He doesn’t eat, in fact doesn’t even drink water at the events at which he’s shooting. He wants to keep a distance and not lose his objectivity. He has torn up checks people have written him for his work because he wants to maintain his full autonomy. He said something to the effect that money was cheap, freedom was expensive.

Then there’s Bill personally. What an interesting man! This might sound sacrilegious but it made me wonder if Bill was high-functioning autistic in a way. He is obsessed with fashion photography the way he has defined it. And that is his life. He has had no romantic relationships in his 80+ years, he sleeps on a couple of boards, his closet was the handle of a file cabinet. And he has a magical smile and twinkle in his eyes. There is almost a child-like innocence and glee in what he sees and discovers in the fashion world. His laugh is un-self-conscious and infectious. There is a moment in the movie where they ask him about his going to church every single Sunday. And that’s one of the rare times I see him on screen go inward and seemingly almost lose his composure – he looked sad. I am SO curious as to what was going on inside him.

Another thing I really enjoyed about the movie were the many different people and personalities who were interviewed and profiled and talked about. Bill’s relationship with John (?) at the NYT is intimate and honest and feels like a pair of old slippers! Ana Wintour’s interview footage is played extensively. She is extremely articulate in describing her view and experience of Bill. I like the juxtaposition of Ana talking about Bill and the images of Bill going about his daily photography. Personality wise, they seem polar opposites in some ways – Ana carefully groomed and dressed and beautifully packaging all she has to say about him. Bill – speaking in the moment with always an eye out for his next interesting shot. The 94 year old woman who also lived at Carnegie Hall really captured my attention – she poses beautifully for her shots and has a tremendous sense of style and presence to my eye. Then there’s the guy with the hats or the Nepali guy with the out-there suits. It’s eye-opening to me that these are all real people with real lives who dare to fully lean into their sense of style and presence. Powerful!

I was upset by the changes at Carnegie Hall. The gorgeous and history-making ballet studio that’s now rows of cubicles for telemarketers. The resident artists who have been forced to move out – some who’ve lived there for decades and are now in their 80’s and 90’s. I can’t imagine the impact of leaving your home after so many decades and moving to unfamiliar surroundings after so many decades. And on a meta scale, I’m sad to see the slow fading away of art and artists from such an establishment.

Lastly, I recommend you watch the bonus footage on the DVD. I like how they described Bill’s shooting style as sneaky. Bill talks about how he would never get into a person’s space or inconvenience them in any way. He holds up a shining beacon of how to conduct oneself and be successful amid the noise and entitlement of the paparazzi and others to famous people. In all his years, Bill has always been kind in his work though he had plenty of opportunities to also make fun of people. His philosophy here reminds me of what Angie has said and blogged about. This is about FUN and this is about being kind and generous and appreciating the beauty and style in anyone and everyone – no matter the walk of life you come from.

Thank you YLF for running a competition to win this DVD – which I did. I am so glad I watched this movie.

Angie: I knew you’d love it just as much as I do. Both Bill and the work he continues to do every day are very, very inspiring (I know this word may be overused sometimes, but after watching the documentary, I think you might agree). His knowledge about all things fashion is vast, he has chronicled entire fashion decades and part of New York City’s cultural history with it… and the way his eyes just light up and you can hear the smile in his voice every time he gets to do what he loves most.

Sihaya: Thank you for this beautiful comment. You’ve touched upon many of the elements I too found the most moving and fascinating. And exactly!! I’m so happy you mentioned this! I make the same link between Bill Cunningham and Angie/YLF: both wholeheartedly believe in having fun with fashion at all ages, and in treating everyone with kindness and respect. That is the heart of the matter for me.

Mellllls and Sylvia: I hope you’ll enjoy the movie!

Inge – yes! His eyes literally twinkled and his smile lit up the whole room each time he talked about his work/play! I just hope I can see this man in action some day on the streets of NYC.

Angie–coincidently I did recently see this movie documentary on Bill. It was very entertaining. Being both a photographer AND a stylist–I especially loved it. I like the idea of shooting everyday scenes to see how mostly new yorkers interpret fashion from the runways! I love the idea of his “themes”–such as “animal”,”shoes or something.

Next trip to NYC, I intend to dress “down” and shoot like “Bill” on Madison ave and the other cool “fashion districts”.