Black Friday: the start of the sale season
Finding the right sweater dress

Congratulations Corey! You win the $250 T.J. Maxx and Marshalls gift voucher. You were a clear winner so we didn’t need to use the tie-breaker question, but the competition was fierce.

On behalf of the TJX team, thank you so much for your thoughtful suggestions regarding the shopping experience. It was great to see the positive sentiment about the TJX concept and their retail chains in your responses. The chart below shows the four clear themes that emerged in the feedback: improvements to the organization of the store, improvements to the dressing rooms, more information regarding the stock in the store, and a wider range of available sizes. 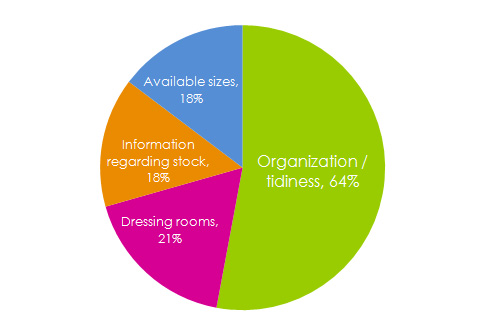 Top suggestion topics and the percentage of entrants who mentioned them.

Angie, you are brilliant to do the quiz and gather the imformation. I’m sure TJMaxx and Marshalls would love to see this pie graph. I did not take the quiz but this graph shows exactly how I feel about their stores. I hadn’t even thought of having more information regarding stock. If they could put that out there for the world to see it would be very helpful and draw in the shoppers.
Thanks for you effort in doing this. You’re great.

Congrats Corey!! Well done. Enjoy your shopping trip – and maybe post pictures of the goodies you got?

Hi Angie,
I had a blast taking the quize you made. And I must say your quiz inspired me to go to TJ maxx last weekend. I would say it was the best ads that TJ maxx came up with in a while: to invite you to the HQ! I always like to shop at some place that has a great deal and if they are willing to listen to consumers opinion, even better! And Conguratulations to Corey!

since we are all fans of angie’s, and those of us who’ve been reading her blog for a couple of years (or more) have really seen this blog develop and grow.

so hats off to you angie for being invited to TJX headquarters because you have risen to the top of the fashion blogosphere world.

way to go. your hard work and talent are paying off for you. and we all reap the benefits.

Wow, congratulations Corey! We’d love to see photos on the forum of stuff you buy with your prize! You’ll be able to get so much there. I love TJX.

Enjoy the shopping spree, Corey! Spread a little Christmas cheer as you charge through those crowded little TJMaxx corners with your shopping trolley. I was at a TJMaxx store yesterday getting the Christmas gift thing rolling and tried to do precisely that. The store was pumping. Get there early while it’s still tidy!

Thanks for your awfully kind sentiments San and Carissa. We feel proud to have been part of the TJX blogging selections and we are happy to spread their word.

Congratulations Corey. Tell us about your experience when you shop TJMaxx.

I must say that since the blogs on TJMaxx I have noticed their advertisements. So I take back my comments on promotions. They have done an excellent job of their TV advertisements this year. I think their message is spot on.