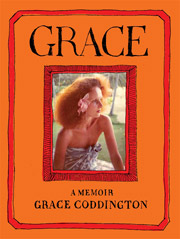 Creative Director of American Vogue, Grace Coddington, “suddenly” became famous after making an indelible impression in the 2009 documentary The September Issue. But for many years before that she had been an inspiration to those behind the fashion scenes. In Grace, A Memoir, Grace tells her own story, sharing both her personal and professional life with the reader. From her childhood in Anglesey, her early career as a model, the car accident that nearly ended it all, her trajectory from London in the Swinging Sixties to the years working at British Vogue, crossing the pond to work with Calvin Klein and then joining American Vogue in 1988. She talks about her two marriages and thirty-year romance with renowned hair stylist Didier Malige, the death of her sister and her relationship with Anna Wintour. Along the way she shares her views on everything from plastic surgery, cats, photography in the digital era and the nature of beauty.

Like Grace, many models continue to work in the fashion industry or related creative fields after they quit or cut back on modelling. Think Lauren Hutton, Isabella Rossellini, Andie MacDowell, Elle MacPherson and Helena Christensen to name just a few. Here are two other (former) models whose careers I’ve been following with particular interest:

Iman — because my friends and I used to pore over her arty high-fashion images during class breaks. In retrospect, I believe she was our introduction to the international world of fashion and style.

Somalian-born Iman was perhaps one of the most well-known supermodels of the 1970s-1980s. She landed her first modelling job for Vogue in 1976, and became the muse for acclaimed designers like Yves Saint Laurent, Calvin Klein and Issey Miyake. After almost two decades of modelling, this statuesque beauty started her own cosmetics firm in 1994, focussing on difficult-to-find shades for all women with skin of colour. She has also co-hosted The Fashion Show with Isaac Mizrahi and has created the “Global Chic Collection”, a line of jewellery, handbags and accessories that is sold exclusively via the Home Shopping Network.

Sophie Dahl — because we share a passion for writing and cooking.

The granddaughter of British writer Roald Dahl began her career as a (plus-size) model, and caused quite a stir when she was photographed nude for Yves Saint Laurent’s Opium billboard campaign. Sophie moved on to acting, both in the theatre and on the big screen, and in 2003 she returned to her first love: writing. She has published a novella, a novel, numerous articles for international magazines and has chronicled her misadventures with food in “Miss Dahl’s Voluptuous Delights”. Following this successful cookery book, she wrote and presented a very popular BBC cooking series, and starred in a documentary in which she explores the life and times of her food heroine Mrs Beeton.

Do you like to keep up with what models are doing after they have left the fashion limelight? Is there anyone in particular whose career you have been following closely over the years? If so, we’d love to hear about it in the comments.

I am interested in some of the models whom I grew up with in the 80s. Some modeled for Seventeen and some went on to become supermodels, like Nikki Taylor and Willow Bay. I believe Willow works for Estee Lauder or one of the major cosmetic firms now.

There are two I cannot seem to find any information on. One was a teen model named Clarkia. Never heard anything more after Seventeen so perhaps she went to college rather than pursue modeling? The other was a blond model named Estelle, I think French, who was on the cover of American Vogue a few times. If she used a last name, I don’t remember what it was. She was in the group with Paulina, Linda Evangelista, etc. Does anyone remember her?

Cannot wait to be able to buy Grace: A Memoir. Thanks for sharing!

Grace Coddington is an amazingly creative person in all areas of her life.
I grew up in the 60s but was never a Twiggy fan, I loved Jean Shrimpton & how she left modelling (and an abusive relationship) to run a hotel. There is a rare interview with her in the link. Her take on the fashion world is interesting.
I love Imam & Sophie Dahl too.

Debby – I think you might be talking about Estelle Lefébure (formerly Estelle Hallyday): http://supermodelicons.com/est.....010/12/26/
Clarkia doesn’t ring a bell, sorry.

Caro – I didn’t know about the hotel, off to read that article straightaway, thanks!

A terrific post, Inge! Grace Coddington makes quite an impression.

I wonder about model Alek Wek. Do you remember her? And ’80s Paulina from Estee Lauder. I love Twiggy too, although we see her from time to time today.

I’ve always loved following the careers of models. I think it’s because I wanted to be a model when I was in H.S. (I was 5’10” tall and 120lbs.) and friends used to tell me I had a “Patti Hansen look” about me….I wish!!! So, I’ve actually met Christy Turlington, a doll. And my eldest daughter was scouted by Elite (she chose not to do it and instead, go to college) and Wilhelmina. I would have DIED for the chance, but not her.

I just read about Alek. She was a guest judge on America’s Top Model last year and this: In July 2012, she will be returning to South Sudan with the UN Refugee Agency to highlight the stories of refugees returning from the north and the massive efforts needed to build and stabilize the country.
Nice to see that she’s continued with her activism.

Timothy Greenfield Sanders, the great photographer, just came out with a documentary, “About Face,” which was shown on HBO, about the ex-supes: http://www.vanityfair.com/styl.....rs#slide=1 I’ve been dying to see it, so I hope I’ll be able to catch it sometime!

@Debby, many of the models we saw in Seventeen in the Eighties went on to interesting careers outside of fashion. I remember that Willow Bay started as an intern at Seventeen and then became a model. She went on to become an anchor at CNN. Phoebe Cates went on to acting, and of course we know what became of Whitney Houston. I can’t remember their last name, but there were identical twins — Tara and I’ve forgotten the other sister’s name — and I think I saw them in some sitcoms.

Inge — Yes, thank you, that is the Estelle I meant! (Oh, how I miss the old Elle magazine of the 80s, before they added advice columns and horoscopes. I loved Gilles Bensimon’s photography. I think he and Elle MacPherson were married and then divorced later on…)

Julie — Thank you for the trip down memory lane. When Whitney died, I couldn’t stop thinking about how she was a model for Seventeen and had the world before her back then. I’m trying to remember those twins. There was also a model named Renee that I loved too. It’s always fun to discover how things turned out for them.

P.S. Julie, Niki Taylor had a sister, not a twin, who did a little modeling with her. Unfortunately she died from an asthma attack: http://en.wikipedia.org/wiki/Krissy_Taylor

Anyone can sell me a magazine by putting Iman on the cover. She’s so cool. She’s married to David Bowie! They had a beautiful house in South Asia once upon a time.

I’m grateful for Elle MacPherson’s line of lingerie. Don’t think I had a bra that fit properly until her line came along.

I loved Isabella as a girl and Carmen.

I know Twiggy has a line of clothing on HSN or similar shopping network.

Clarkia is a name that sounds familiar, but I can’t recall her face.

Angie – Absolutely, Alek Wek is so striking. And Paulina Porizkova, right? I think she was one of the jury members on America’s Next Top Model for one season?

Mamavalveeta03 – Oh thanks for the extra info on Alek. I have put “About Face” on my to watch list.

Debby – I didn’t know Niki Taylor had a sister, so tragic.

Rachylou – Glad to hear Elle MacPherson could help you out in the bra department;-)