Shirting fits for men
The rise of the rise

This invention blows me away. Have you ever longed for a shoe that goes from heel to flat at the push of a button? Well, apparently a British Insurance Company by the name of Sheila’s Wheels has invented just that. They’re called Sheila’s Driving Heels and the idea seems too good to be true. According to Sheila’s Wheels:

“The design concept is aimed at those 11.5 million women drivers in the UK who put themselves and others at risk by wearing the wrong footwear when they’re behind the wheel.”

I don’t think that the product is for sale, but it’s fun to think about. Thank you Elizabeth for sharing the info that you found on Gadgetcandy. With technology like this in the pipeline, who knows what’s in store for us next… look out, 007! 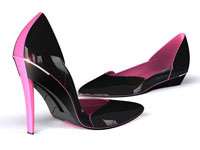 Unbelievable! Wouldn’t it be cool if you could dial in any heel height?!! No more having to pay for tailoring hems on pants! That would make me VERY happy.

It would indeed. That way you would always sport the correct pant length!

This invention would make me happy on so many levels!

i keep a pair of tom’s shoes in my car for driving, but i hate having to switch! this invention would be awesome

Cool shoes. I like the pink stripe. I wouldn’t mind a few pairs of convertibles, seeing how some days I do too much walking for heels, but would love to add the height when I get where I’m going (without having to carry around an extra pair of shoes).

But as far as driving goes…

Am I the only one that just takes the right shoe off while driving?

I always lose the highheels when driving. I’m surprised everyon else doesn’t! Plus, there is something satisfying about bare toes on metal petals.

I LOVE IT!!! I wish I knew about these sooner, because I wear heels every day, and it would be so nice to be able to flatten them to drive. I wonder, are they available to buy now?!