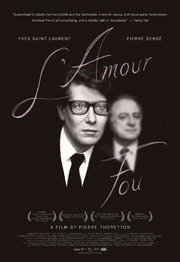 This slow-paced, decidedly melancholic documentary tells the life story of French couturier Yves Saint Laurent through the eyes of his partner Pierre Bergé. We get glimpses into the timid designer’s career and personal life, from his appointment as Christian Dior’s successor at age twenty-one to his retirement in 2002. Archive footage and interviews with friends reveal his passion for travel and art, his dedication to his work, playful moments backstage, but also the enormous stress of coming out with four collections a year, and his struggle with depression and addiction.

I had read so much about the relationship between Yves St. Laurent and Pierre Bergé, and following the death of YSL many magazines, such as the French version of AD were showing both their Parisian home, and their Moroccan one, with Bergés commentaries on an almost monthly basis. I’m sure such publicity helped tremendously when almost everything went on auction (I think about 400 million euros was the total amount raised.)
Personally, I have always found their decorating style OTT to the point of being kitsch (Oh yes, it’s possible to have objects worth millions, and for them to be assembled in a very ‘kitsch’ fashion!). I have never been able to understand how a designer who showed women that it was possible to be chic and minimalist, could live amongst such an abundance of objets d’art. I think this DVD, whilst it did show some interesting insights into the St Laurent genius was very much Pierre Bergé’s perpective on his life and times. I also find it interesting that everything he says and writes about the man with whom he lived (and presumably loved!) for so long now bears the signature ‘Pierre Bergé et Associés’. There seems to be an astonishing, almost indecent, lack of any intimacy here, and Bergé talks in the film about ‘losing HIS paintings, objets d’art, furniture.’ It saddens me. Yes, he was almost certainly the business brain in the partnership, but would any of us ever have heard of Pierre Bergé had he not been the partner of the creative genius that was Yves St Laurent?? I somehow doubt it! I also doubt whether he would ever have been able to live the luxurious lifestyle he had, without his partner.

Like most highly-talented individuals, Yves St Laurent was probably a very difficult person to live with, and it is to Bergés credit that he helped him through his almost-permanent depression and oh-so-complex artistic temperament. Yet he was perhaps not the right person to play such a prominent rôle in the realisation of this film. I personally, would like to see a retrospective of YSL’s work and legacy from a more detached, sanguine standpoint.