Greg and I recently returned from a brilliant holiday in Israel. We visited close friends Shirley and Iftah, who were born and bred in the suburbs of Tel Aviv. I’ve visited Israel before, but I saw the country with fresh eyes this time round. Having savvy and spirited local tour guides, who happen to be fabulous friends, was extra special.

Israel is a small country which makes it easy to cover a lot of ground in a short space of time. So we took several short road trips through all types of terrain: from the walled city of Old Jerusalem, the ruins of Caesarea and the salty cliffs and desert of the Dead Sea, to the leafy hills of the Golan Heights, the pretty shores of the Sea of Galilee, and the bustling urban pulse of Tel Aviv. In short, Israel is a complete cultural mind blow.

Personal style is as diverse as the terrain, and the extent to which people observe religion comes through loud and clear in what they wear. Ultra orthodox Jewish women take modesty to an extreme, covering up from head to toe in conservative long skirts, long sleeved tops, closed flat shoes, hose and headgear. Less orthodox women are still quite covered up, but their clothes are more modern and colourful. Secular Israeli Jewish women, on the other hand, are super trendy and far less modest, with a style that reminds me of Southern Europe.

The most striking thing is that you’ll see ALL levels of modesty at once. Unless you’re in an ultra-orthodox area, it’s common to see someone completely covered up alongside someone sporting tons of cleavage in a form fitting mini dress. The widely varying degrees of traditional and modern attire throughout the country makes for a unique street style experience. It really hits home how modest dress means different things in different parts of the world.

This sort of contrast is evident in so many aspects of Israel. A thriving high tech sector surrounded by ancient artifacts, beautifully barren desert just hours away from lush Mediterranean coastline, the struggling, recently nomadic Bedouins living on the outskirts of a modern city, and normal day to day life in the shadow of the social, economic and political turmoil of the region. It was a fascinating experience and we look forward to exploring more of Israel and the Middle East. 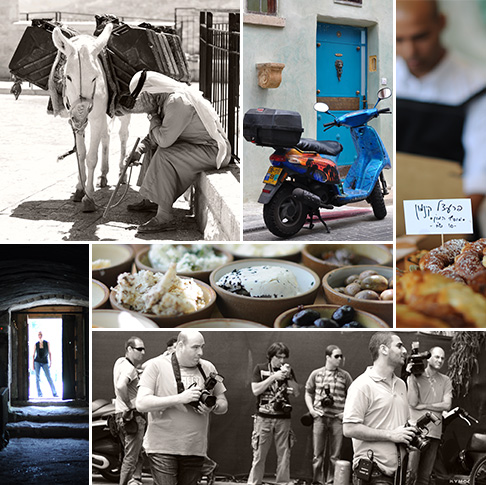 Impressions of Israel: We took more than a thousand pictures in 8 days. These ones capture just a few of the moments. An old man with his donkey in Jerusalem, a funky scooter in old Tel Aviv, the most delectable pastries you can imagine, a traditional Israeli breakfast in Metula, paparazzi at work outside a star studded event, and the remains of an ancient underground Jewish cemetery in the Bet She’Arim national park.

Awesome pictures Angie! Is that you standing in the doorway?
Thankyou for sharing.

Thank you very much for sharing your photos with us. What a fascinating place!
I look forward to seeing the street style tomorrow.

Your adventure sounds wonderful, as do your kind friends. I look forward to seeing more photos tomorrow, to illustrate today’s descriptions of women’s style in Israel!

Jerusalem is my DREAM destination…forget Europe, Asia, or South America…one of my goals in life is to walk those ancient streets. Thanks for sharing a part of your trip with us…how wonderful!

What a wonderful description of this country! Even after over 10 years in Israel I am still amazed to see super-conservatively dressed women speaking with women barely dressed at all – often in the context of picking up their kids at school. Women are super trendy here, and the hot weather does not seem to influence anyone’s choice of clothes. Linen, which would seem to make sense, seems far less popular than clingy synthetic fibers. Can’t wait to see tomorrow’s post!

What a great summary of your trip. Thanks so much for sharing your experiences with us! It is always so much fun to read about your travels and your insight into different cultures. I, too, am looking forward to tomorrow’s report on street style.

Beautiful images adding to an insightful entry. Thank you, Angie, for this glimpse of Israel. I hope to go there someday.

Gorgeous photos. I want to know more about that traditional Israeli breakfast!

Color, texture, flavor,the sights and sounds of a different culture add so much to our lives.

What a beautiful and vivid description Angie. And you’re seducing me with your gorgeous pictures and talk about road trips and all those delicacies!-) Israel sounds absolutely breathtaking, and such diversity indeed (in all aspects of life).

I can totally relate with what you are saying about personal style and levels of modesty: I live in the Jewish quartier of my city and see this everyday (on a micro level of cours). I’ve always been intrigued by the ‘contrast’ (I use quotation marks here, because there’s nothing ‘jarring’ about it, it feels very natural). It’s funny, reading about it in your post today, made me realize – even more than usual that is – how much I love living in such a multicultural neighbourhood! (Travelling or reading about other people’s trips does that to me).

Wonderful photos, you look like a fashion model in that doorway shot.

I feel for the working donkey.

http://www.thebrooke.org shows how hard equids in that part of the world work and need help.

Angie,
I love how you described how a woman’s beliefs were expressed in her fashion choice. And how the women of different expressions are accepting of one another. Love and respect- what we all are seeking! Refreshing.

i can not wait to see rest of the pictures! love to see how other countries dress.

Oh how I needed that brief mini vacation (at least in my mind) today. Thanks for the wonderful descriptions and sampling of photos.

Thanks for the little respite Angie! Looking forward to tomorrows post!

Lovely words Angie – they evoked just as much a sense of the place as the gorgeous piccies. Can’t wait to hear more about your trip!

Great to hear a bit about Isreal, thanks Angie. I really don’t know anything much about it, but your concise description makes me feel like I’ve seen a long documentary! Love your work. Thanks again!

Oh, and love those pics and the way you’ve set the collage together.

Angie, thank you so much for sharing your experiences, and I look forward to more stories and observations about the culture, food, and of course street style.

I also admire your collages. Greg and you take wonderful pictures.

Sounds like the trip of a lifetime – what a great experience!

San, that is actually me in the doorway of the cemetery. Well spotted.

Fjt, you hit the nail on the head – the ancient ruins and biblical streets of Israel are magical.

Shevia, our impressions of Israeli street style are the same. Good to hear a local validating my perceptions.

Laura and Lena, Israeli food is a mind blow. The best pastries, olives, yogurt, salads, pita and goats cheese I’ve ever had. That’s whats on the menu for breakfast. Sublime.

Inge, you’d love Israel for all the reasons you’ve described. I hope you get there someday.

Thanks for the compliments about the photographs. That’s Greg’s skilled handiwork and I agree that he does a brilliant job

Angie, such an amazing summary of your Israeli trip, and the pictures are breathtaking!

Next time you must visit Haifa! We have amazing views, and, of course, the Bahai temple – Haifa is the center of Bahai religion.

I think secular women dress less modestly in part in order to make a clear distinction between them and religious women. Another reason is, of course, the climate. Do you find that in southern countries the standards of modesty are more relaxed than in the northern ones (due to a warmer climate)?

Those are incredible photos. That one of the scooter is great.

[…] « Israel, where style mirrors a country of contrasts […]

HannahC, good to see your comment. I’m sorry I missed you in Israel and it’s too bad that we couldn’t see Haifa with you. Hopefully next time.

An interesting point about modesty, or lack thereof regarding secular woman. I never thought of it that way. What do you mean by different dress in Northern countries vs. Southern countries? Do you mean the different hemispheres, HannaC?

Beautiful photos and description of your trip. Now I want to go to Isreal! Thank you for sharing these.

Thank you for sharing these photos! I would love to visit Israel.

I know for a fact that clearly signaling that you are not religious is very important to secular young girls (teenagers and early 20s). Thus, they will never wear knee-length skirts with a high-neck long-sleeved top, for example: it will always be either a mini-skirt, or a more decoletted or sleeveless top.

[…] pretty look. I was able to put an example of the tame-looking variety through their paces in hot Israel a couple of weeks ago and they passed with flying colours. Comfy 8-hour walking shoes if you […]